New research from the Grant Thornton International Business Report (IBR) [ 742 kb ] reveals that while business confidence in 2014 climbed to levels not seen since before the financial crisis, a recent spate of uncertainty is weighing on growth prospects for the year ahead. With the price of oil plummeting, the future of the eurozone still far from secure, tensions in Ukraine and concern around the pace of the slowdown in China, the confidence of business leaders, especially in the world's largest three economies, has slipped as we enter 2015. 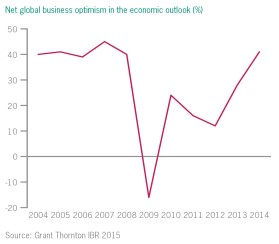 “We saw the highest levels of business confidence since 2007 over the past 12 months, but looking ahead, there are a number of potential flashpoints which are threatening global economic stability. The volatility in the oil price is of particular concern to global markets: prices have dropped to five-year lows in December and while cheaper oil will benefit net importers and industries such as manufacturing and transport, it is already spelling trouble for energy companies and key markets such as Russia and the Middle East.

"The threat of recession and deflation in the eurozone and Japan is also a massive concern. Shinzo Abe has won a new four-year mandate to try and kickstart the Japanese economy but the first round of his Abenomics programme can hardly be viewed as a success. Meanwhile, the eurozone has barely grown in five years, unemployment remains stubbornly high and a change of party in Greece could reignite the sovereign debt crisis. Add in the slowdown in China, which is dampening demand for natural resources from Latin America and exports from southeast Asia, and it’s clear that the outlook for 2015 is far from stable."

This uncertainty is weighing heavily on business growth prospects. Both revenue growth - down  13pp (from 56% to 43%) - and profit growth - down 11pp (from 43% to 32%) - prospects have both fallen globally. In both China (37%) and the US (35%), revenue growth expectations dropped 33pp over the quarter. Profit growth expectations in China (down 33pp to 13%) and the US (down 23pp to 34%) have seen similar falls. That said, European businesses are actually feeling more positive about growth compared with three months previously with profitability expectations up from 32% to 40%.

Francesca Lagerberg added: "The prevailing uncertainty is making life tough for businesses, forcing them to delay decisions over investment in the future growth of their operations. Given the turbulent state of global markets this is understandable. They remain positive about their expansion prospects but certainly less so than three months ago.

"Chinese exports continue to fall as it rebalances which could have major consequences for the global economy. Stronger global demand may boost exports next year, but flagging property investment may largely mitigate this. Meanwhile, if the US Federal Reserve finally raises interest rates next year, it could have major knock-on effects across the world, especially in a number of emerging markets.

“Business confidence is a key indicator of future economic performance. The large rise in global optimism in 2014 came as a pleasant surprise after a couple of tough years but the dip in the last three months suggests that businesses around the globe see trouble on the horizon in 2015.”